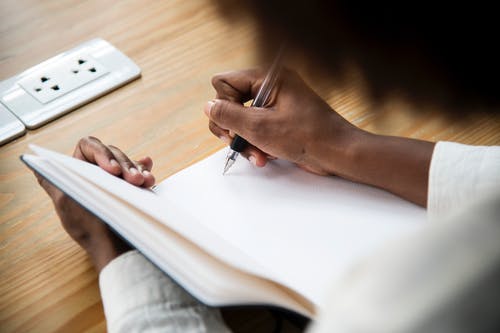 I took 2 writing intensive classes this spring semester, but that was only the tip of my iceberg. Each task, both inside and outside of class, provided me the growth I didn’t know I needed. And for that… I’m grateful.

8 essays in a 16-week semester plus pre-writing activities every week. 90 percent of those essays were about Oedipus Rex. Add that to writing assignments for 3 other classes and I was drowning! It was the most writing I’d ever have to endure. Talk about stresssssed. Haha…what a surprise I was in for.

Let’s fast forward to 2018. I took on more active roles in college — roles that required lots of research and writing. I was the VP of Hallmarks for my college’s Phi Theta Kappa chapter, a member of the writing club, and contributor for the college paper.

Some of my duties included intensive research and creating summaries of the information I’d collect. Then I learned how to create newsletters, write award essays nominating others for honors/recognition, editing different essays, and more. It was significantly more than I was used to, and at first, I didn’t know how to handle it.

Award Essays As VP of Hallmarks, I was to delegate award essays amongst the officers- including myself-review and edit them along with an advisor, and submit them to the proper source. In my case, as was the case for many of the others, the nominee I was writing about was someone I didn’t know well. Thus, I interviewed my nominee before writing about her.

Research your source first. Look for basic things, like how long they’ve been working in their department and where they got their degree from… Be considerate of your source. I corresponded via email and made sure to ask her what her schedule was that would allow for an interview.

During the interview, make note of follow up questions that may occur to you from your subject’s responses. This is where carrying a notebook comes in handy. At the end, make sure to thank them for their time and offer to update them on their award status.

Case Studies Case studies involve a lot of scholarly research on something that has been studied by others and compiling a report about it. I did my first case study a couple years ago on something like the oil industry and its effects on the environment. It was a “mini” one, not nearly as intensive as the ones I was involved in last fall. On behalf of my “team”, I completed a whole case study challenge within a week. I also assisted in the international submission of one (this time, the whole team contributed) of the same topic: Social Media and its effects on how people view news.

Newsletters Another duty in my role as VP of Hallmarks was creating and sending newsletters. Initially, I had no idea how to do one, yet was eager to take on the challenge. My first one was, admittedly, TRASH. With guidance from one of my team mates, however, I improved my newsletter game. So if you need some newsletters, I can say I’m ya girl!

Blogging I was introduced to the great art of blogging through Street Team. Street Team is a DCCCD organization for students across Dallas community colleges to impact change through service and inspiring education. Student ambassadors across the district, basically. Anyway, we have these monthly missions and one of them was writing a blog post for the DCCCD student blog.

I’d never written a blog post before, so I decided to give it a shot. I wrote about why I chose Journalism. That was September. Now, as of May 31st, I have done 4 blog posts for different outlets. I enjoyed it so much, I started my own blog! This very one- Rae’s Violet Words. The main thing I like about blogging? It doesn’t have to be 3+ pages at a time.

Yearbook The last time I had anything to do with a yearbook was my senior year. I thought I’d never have the opportunity to deal with one again– until Phi Theta Kappa. On my part, I wrote captions and summaries, table of contents, reviewed and edited pages delegated to fellow officers, designed the cover, and wrote the acknowledgements. It was very stressful.

Scriptwriting I took a scriptwriting class to fill out my schedule. It was a hybrid class, 1-meeting day a week, and I kinda loved it! There, I learned the 2-column script and standard screenplay formats. Writing included: promos, features, radio, commercials, news package, documentary, banners, scenes, and shorts.

Media Writing This took the biggest toll on me. I’m gonna be honest…it made me completely question my journalistic aspirations. However, it increased my interest in examining news coverage. It was the most writing intensive of all! New writing I learned included: press releases, broadcast news writing, online journalism, and profiles. That’s only the tip of the iceberg.

Newspaper I became the chief-student editor for my college newspaper. Long story short, I formatted and published an entire issue of the paper. I was also a contributing writer.

The days of constant Oedipus Rex essays and analyses once daunted me with so much writing. Now, I’ve done the most writing in my journey toward my end goal. It was so much writing, I didn’t think I’d make it. But I accepted the challenge, and the pain was worth the gain!

2 thoughts on “The Most Writing I’ve Ever Done”